This year’s edition of MOITA METAL FEST took place on the 1st and 2nd of April, at the usual venue Sociedade Filarmonica Estrela Moitense. It has presented us with an excellent billing of 18 bands, 6 on the first day and 12 on the second, which left their marks on the stage of a crowded [...]

The second  day of party started with the Portuguese band Extreme Retaliation, now based in Braga, opened the afternoon with a nice gig. The drummer had a great performance, and the sound was very consistent as well. Condylomata Acuminata from Austria brought their party grind to the pit with band members coming of the stage [...]

Just like last time, the RCA Club in Lisboa was the grinders stage for the second edition of the Xxxapada na Tromba. A festival organized with total devotion by Sérgio Páscoa and Carlos Guerra, to name a few, who put up an amazing event to promote the best in the grindcore scene, divided in 2 [...]

The portuguese record label Raising Legends, has decided to celebrate Christmas with a special two-day event featuring some of their bands, that took place in Porto, at the venue Hard Club. Day 1 The first day was dedicated to rock oriented sounds with the participation of the bands Projecto Sem Nome, Sacapelástica, The Fines and Blame [...]

Just like the clothing brand, the Mosher Fest sees it’s 2nd year of existence. Organized by the Mosher Clothing™ founder Rui Alexandre (also known for his guitar work in the Thrash squad Terror Empire), this year the fest took place in the Cascata Club. Cascata used to be known as Le Son, a venue dedicated [...]

The Estudantino café, a venue known in the Metal underground for hosting a high number of concerts received the 2nd edition of the OMG Fest. An independent festival organized by Omega Som, an entity focused on featuring some of the best bands that the Portuguese underground hides within its ranks, but without losing its interest [...]

Hot, hot, hot. The third day of the festival; the feelings about the emotions of the previous day; the temperature in our burning brains and stomachs. Welcome to Reverence’s high voltage. The first hours of the last day showed several almost-dead people fighting to attend the early shows of that Saturday. We’ve chose to open [...]

Day 2# On Friday we were awaken by Sleep’s check sound as a way to warn us that a massive day of sound was ahead of Reverence. On the way to the festival area we soon found out who the surprise guest was: the unbearable hot sun that impelled us to drink liquids. Alcohol mostly. [...]

The Crato festival was held once again in the beautiful Alentejo village near Portalegre. In a constantly evolving process, this year’s edition saw the exhibition areas as well as all the restaurants and, crafts tents open to the public, free of charge. Adding to this, there were musical performances taking place throughout the afternoon and [...]

Back to the small and picturesque village of Valada for the second edition of Reverence Festival. One year has passed since the debut but the same vibrations anticipated the weekend. More than 70 performances, with a majority of international acts keeping company to some of the best rock produced in Portuguese lands. Day 1# The [...]

TUSKA Open Air 2015 Day #1 – 26.06.2015 The festival’s ground is open space and has 3 stages, two in open space (Radio Rock Main Stage and Stage Hell, more or less in opposite each other but slightly skewed to the left side of the room) and another in enclosed space (Club Stage more into the [...]

It was under what you could call an infernal heat that the first few metalheads started their march towards Side B, in Benavente, Portugal, to attend the fifth edition of Sardinha de Ferro (or, as one of the bands of the day – Ravensire – had written on their set list, “Iron Sardine of Hell”!). An [...]

(Picture gallery below) Day 0 The SWR festival has completed 18 years of existence. Over time the festival has grown at a huge pace gaining a considerable notoriety among the European festivals and placed at the top of the metal festivals in Portugal, by its own effort and merit. So, once again, the pilgrimage to the [...]

Day 2 The second day had its kick start with BORDERLANDS, a young metalcore group. The room was still half empty, but that didn’t stop them to give their best.  Next up was ANALEPSY. The group never disappoints when playing live, and their unique style of slam/brutal death metal caused the first chaotic moshpit of [...] 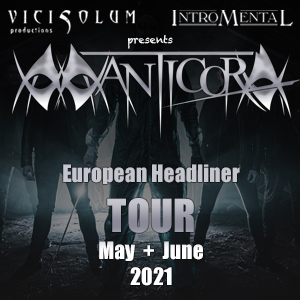