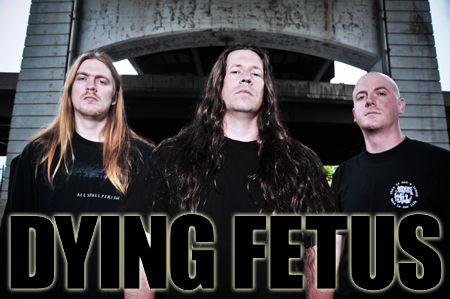 DYING FETUS have set “Reign Supreme” as the title of their new album, due mid-2012 via Relapse Records. The CD is being recorded at Wrightway Studios in Baltimore with longtime producer Steve Wright (SLIPKNOT, MISERY INDEX). The effort will feature nine tracks.

“Thematically, the album is set to be a good old-fashioned piece of social and political commentary in the style of DYING FETUS as we have come to know.”

Commented DYING FETUS guitarist/vocalist John Gallagher: “The last album had some groove in it, but [it] was basically a lot of tech; this one is a return to form of older DYING FETUS albums, so to speak — more modern production, though, of course. Everything’s tight, the sound is crushing, the drums are amazing.”

DYING FETUS will join forces with DEVILDRIVER, THE FACELESS, JOB FOR A COWBOY, 3 INCHES OF BLOOD and IMPENDING DOOM for the Metal Alliance Tour in March/April 2012.