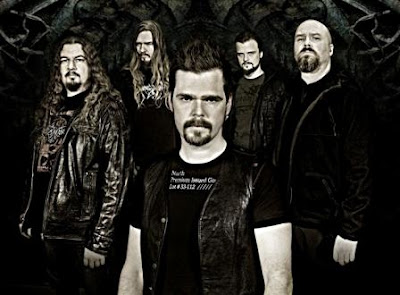 Norway’s unique act Borknagar have finished working on their new album entitled “Urd” which will be released on March 26 in Europe and March 27 in North America via Century Media Records.
The album was produced by Jens Bogren at Fascination Street Studios (OPETH, PARADISE LOST, KATATONIA) in Örebro, Sweden. The album’s artwork was designed by Brazilian artist Marcelo Vasco, who worked on the band’s previous “Universal” release, but also with artists such as SOULFLY, BELPHEGOR, EINHERJER and KEEP OF KALESSIN.

“The cover and design for ‘Urd’ is spot on when it comes to portraying the very core of the band. This time around we wanted an earthly expression through our cover and general design to support and empower the main themes on the album. You can almost smell and feel the texture of the old Norse wooden carvings — still there is a sophisticated and eclectic approach to the expression that entwines perfectly into the music. Marcelo Vasco enhanced our ideas into brilliance, he painted the face of the beast that is about to be unleashed…”

The current BORKNAGAR lineup is: