After the pre-festival partying on the night before, some people were already wasted on the ground when the sun came up. 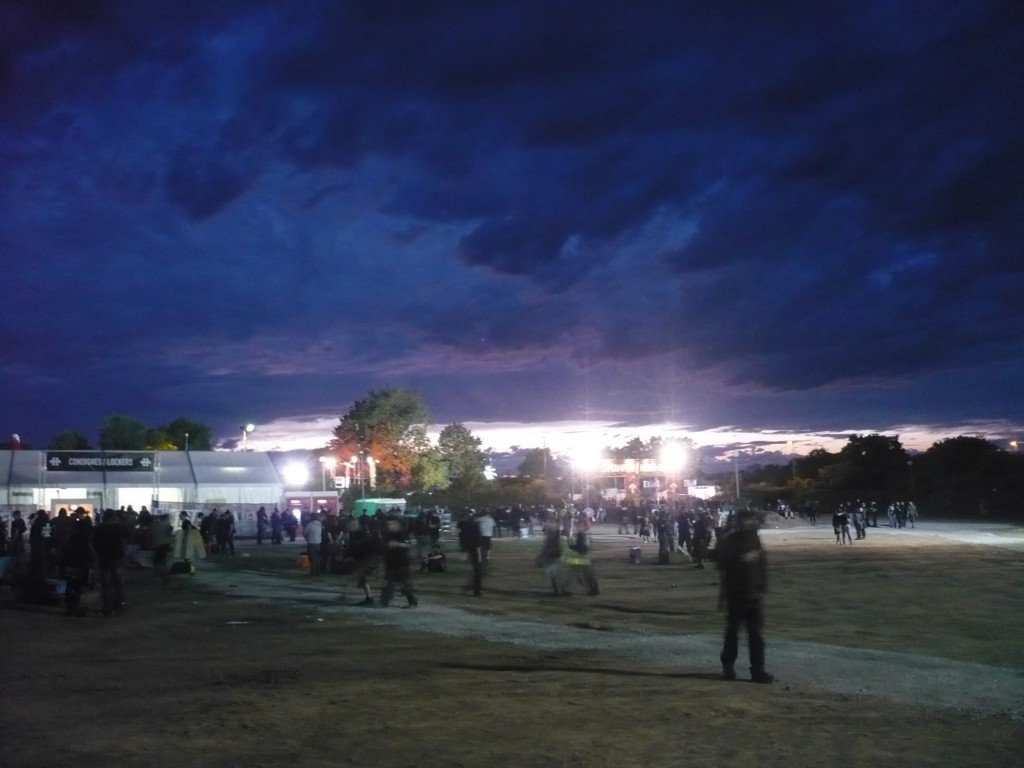 Time for some breakfast, and head to the festival site, to see the decoration for this year. Rusty metal shaped artifacts could be found on the site, like the big Hellfest tree with a swing and other sculptures. 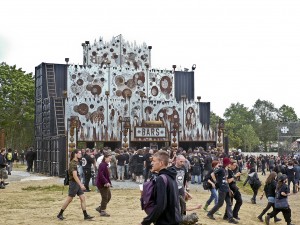 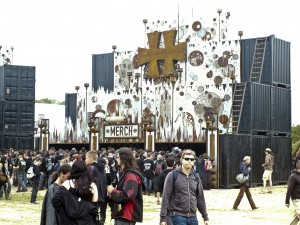 Hellfest is already known for having quite diverse artist bills and this year was no exception. After exchanging money for tokens to be used at the bars, learn our way around the site, it was time to go watch some shows. And you can’t really sleep too much during this festival because the concerts start as early as 10:30 AM and they’re all worthy of waking up earlier than usual. So we started by checking out the French Black Metal band MERRIMACK. Apparently they changed vocalist, again, and their setlist consisted of tracks from the latest 3 albums, emphasizing “Grey Rigorism”. The stage attitude has evolved and they put up a good start for this festival. Brutal Death Metal act BENIGHTED attacked the Altar Stage at 11:40. With a good reaction from the crowd, they quickly delivered tracks like “Slut”, “Fritzl”, “Asylum Cave” or “Let The Blood Spill Between My Broken Teeth”. Good performance by these guys. Going outside of the big blue tent, we went on to the Warzone where EXTINCTION OF MANKIND where starting the moshpit with their mixture of traditional Crust/Punk music. We also visited theTHOU show for a quick glimpse of what was going on. These Americans play a mix of Doom/Sludge, rather slow, but with very powerful guitar riffs and pounding drums, the vocals fit pretty well, and the vocalist seemed intensively living the moment. Back to the Temple stage, SÓLSTAFIR from Iceland started to play a few minutes after 13:30. Starting the show with the hypnotic song “Ljós í Stormi”, it didn’t took long for Mr. Aðalbjörn’s epic vocals to start echoing everywhere. A very short but good and interesting performance by this Icelandic band, a mixture of power and epic sound. There was also time left for playing the single “Fjara”.

Going back to the Altar, right next to the Temple, UNEXPECT were about to blast everyone with their technical music, a well performed mixture of Jazz Progressive Metal and some folk elements, with a lot of twists and surprises. And surprise is maybe the best word to define their show at Hellfest, because their show got more and more interesting and appealing as time went by. Intense and complex, led by the lovely, charming and electrical Leïlindel, the whole band didn’t seem to get tired and their energy on stage is contagious! “Unfed Pendulum” was part of their setlist. Back to the Temple, a different blast was awaiting, a blastbeat inferno brought by the brutal Black Metal band ENDSTILLE hailing from Germany. Filthy, ugly, furious, just like Black Metal should be. Opening with “Dominanz”, “Endstilles Reich” and “Conquest Is Atheism”, Zingultus who was covered in real blood spat ENDSTILLE‘s lyrics while the band continuously discharged their fury on their instruments. A trully powerful show by these germans. Theres was also time for a few more songs, like the single “Anomie” or “Navigator”. Leaving before the end, we managed to catch some Southern Rock played by MOLLY HATCHET at Main Stage 01. What a difference… groovy, totally sounding like the 70’s, almost making you feel like you should have bought a motorcycle when you were younger… These guys surely show to have a lot of stage experience and their show goes on smoothly, until they play their classic “Flirtin’ With Disaster”.

After the 70’s motorcycle Rock it was time for some brutal musical action, so we head back to the Altar to see GOROD. Another brutal French band who play a more technical style, all the members have great musicianship so you know what to expect. Technical brutal Death Metal at its best. With a very dramatical vocalist we are presented with “Birds Of Sulphur” and “The Axe Of God” from their latest album “A Perfect Absolution”. The crowd reacts with a big moshpit and quickly the end of their show arrived, with their classic “Disavow Your God”. A band to see again! As the clock approached 16:30, even though it was in the middle of the afternoon, one of the most awaited bands of this festival was about to start their concert. A true ritual performed by the mysterious Swiss band DARKSPACE. Unknown to most people attending the festival, they managed to create curiosity on many people who didn’t know them until then. Playing songs from all their albums, we could hear “1.2”, “2.10”, “3.15” and “3.16” which drowned everyone on a deep introspective abyss of sound and inner void. No one walked away as the wall of sound embraced the people present, with Zorgh’s created goosebumps as we watched her scream. A trully magical show, not for everyone… too bad they don’t perform live that often. After this colossal show, BRUJERIA were playing next at the Altar. Coming from the distant country of Mexico, what happened on the next 45 minutes was insanity onstage and on the crowd. Everyone’s heard of them, for various reasons, and the band didn’t let anyone down. Their setlist was composed by “Raza Odiada”, “Brujerizmo”, “No Acceptan Imitaciones”, “Matando Gueros” and a few others which led everyone to a chaotic moshpit and crowd surfing.

After the Mexican crazies finished, it was time to head to the Temple again to watch TAAKE. Known for their energetic shows, led by their charismatic vocalist Hoest, we were curious about how their concert would be. And it turned out to be a good surprise! A great attitude, always cheering up for the crowd to participate, catchy tunes that would make you start headbanging sooner or later. A rather patriotic Hoest carried the Norwegian flag around during their show, showing his passion for his nation. Great show by these Norwegians. To the Altar stage again for the Swedish grindcore band NASUM where an anxious crowd was awaiting. A big moshpit was created as soon as they started. The band blasted the audience with songs such as “Mass Hypnosis”, “The Masked Face”, “Scoop” or “Inhale/Exhale”. A band who is totally straight to the point, but after half of the show, it started to become a little monotonous. So we went on to see MOONSORROW, who play a mixture of Black/Pagan Metal in Finnish language. The performance was alright, the crowd reacted well and didn’t take long for dozens of people to start jumping around. The band played “Ukkosenjumalan Poika”, “Tähdetön”, “Kivenkantaja” among others. Not really impressive but still a pretty decent performance.

Before the MOONSORROW show was over, there was time for a quick dinner at the restaurant tents available, food for all kinds of tastes! 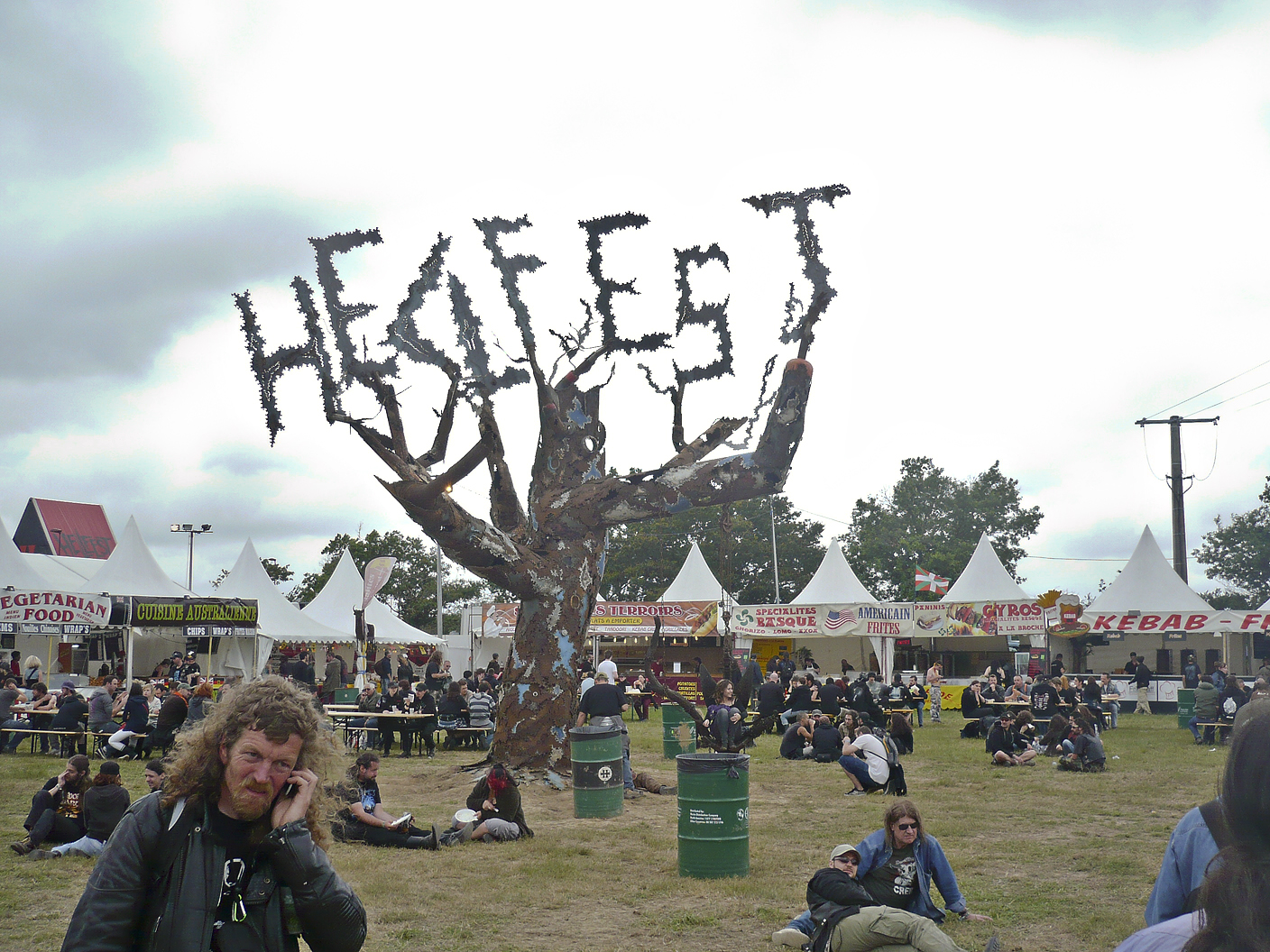 With a full stomach, we ran into the Altar temple where the legendary CANNIBAL CORPSE were about to start their set. With their latest album entitled “Torture” on their bag, they started with 3 songs from that album: “Demented Aggression”, “Sarcophagic Frenzy” and “Scourge of Iron”. With a powerful sound, a huge moshpit could be seen right in front of the stage. Mr. George Corpsegrinder is known for his stamina while headbanging, so it was no surprise to listen to him challenge the fans to keep up with him while they played “I Cum Blood”… They ended the show with their classic “Hammer Smashed Face” and when everyone thought they were not gonna play anymore songs, there was still time for “Stripped, Raped and Strangled”. Killer performance by this legendary band. On the stage right next to the Altar, another band, this time Black Metal veterans SATYRICON were next on the bill. The crowd started cheering and screaming as soon as one of the band’s icons, Frost, entered the stage. Satyr was last to show up, when the band had already started their first song “Now, Diabolical”. Satyr called out for the crowd to scream with them several times, so in overall he was very communicative. A varied setlist was chosen for this appearance so the band jumped from old albums to new ones, then went back in time again to play old stuff like “Hvite Krists Død”, then more recent songs, for example “K.I.N.G.”, but the concert’s highlight was their all-time classic “Mother North”, where everyone in the audience sang along in choir. Even though Satyricon doesn’t create such fast songs like that anymore, this was a good chance to confirm that Frost is still in excellent shape, something that was quite obvious on the “Mother North” blastbeat. Playing in 1349 keeps him in shape, that’s for sure! In conclusion, a very positive performance by this classic Black Metal group. Next were oldschool Death Metallers OBITUARY, who brought all their heavy distorted, low tuned American Death Metal. Always true to themselves, they brought “Threatening skies” to Hellfest, while they were “Dying” on stage until they reached “The End Complete”. John Tardy is a great frontman with a powerful voice! It’s good to see that they didn’t lose their skills.

We couldn’t stay until the end of the show, to be able to see how MEGADETH would do this time. Mustaine’s voice was not in the best shape and everyone could heard it so he ended up compensating on the guitar skills. The stage sound seemed good during most of the show, but the crowd didn’t go very wild. Mustaine himself didn’t seem very excited to be playing in front of dozens of thousands of people, a detail noticeable by his comments and attempts to communicate with the crowd. “Peace sells” was the highlight of the show. Adding all this and resuming, a disappointing concert.

Right next to where MEDADETH had played, KING DIAMOND‘s show was totally the opposite. Great set, a big scenario resembling the interior of a cathedral, with a balcony, stairs, and even bars on front. The bars kind of ruined the visibility a bit, but hey… it’s all part of the show. Even though Kim’s in his 50’s, he can still pull off those extremely high notes, his vocals are in good shape and adding that to the great performances of Andy LaRocque, the show was magnificent. There was time for some classics like “The Family Ghost” or “Sleepless Nights”, a Mercyful Fate song (“Come To The Sabbath”), a guitar solo and also a drum solo. At the same time, AMON AMARTH were spreading their Viking anger at the Temple stage, with Johan who seems to be always in a good mood, managing to make everyone bang their heads at the sound of one of the most headbanging-worthy songs played in this year’s Hellfest: “The Pursuit Of The Vikings”. TRAGEDY unleashed their Crust music on a muddy and not full tent.

It was time to recharge batteries, have some food and drinks and try to get some rest!