SLASH: The Live Album That Changed His Life

HoMiNeS 07/12/2011 News Comments Off on SLASH: The Live Album That Changed His Life 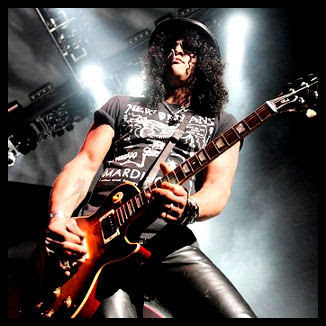 “It was great to go back and play stuff from my entire catalog. I’ve had live albums out before, but this is my first one with the solo band. What you hear on the album was a set list I threw together that morning. My band is a blessing for me. It might have my name up on the marquee, but I still treat this stuff very democratically,” Slash tells Noisecreep about ‘Made in Stoke: 24/7/11,’ his first live solo album.

The 21-song CD features Slash and his stellar band performing songs from his solo albums, plus gems from Guns N’ Roses, Slash’s Snakepit, and Velvet Revolver.

“I’ll ask my band if they want to play such and such, and they usually say yes. Even if they don’t know the song, they’ll learn it in sound check and do it that night. That’s how good they are,” Slash says of his solo band which features vocalist Myles Kennedy (Alter Bridge), rhythm guitarist Bobby Schenck, bassist Todd Kerns, and drummer Brent Fitz.

‘Made in Stoke: 24/7/11′ captures the infamous top-hatted guitar god and his band firing on all cylinders. It’s a disc very much in the spirit of the great live albums of the ’70s. “Live records were so important to me when I was a kid in the ’70s. I think all of the bands that I loved when I was a kid ended up releasing live records during that time period. It was really sad to see live records sort of go by the wayside throughout the years.